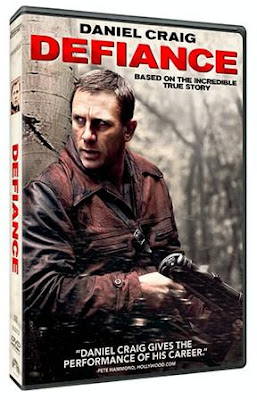 Defiance is based on the true story of the Bielski brothers, Tuvia (Daniel Craig), Zus (Liev Schreiber), Asael (Jamie Bell), and Aron (George Mackay). The Jewish brothers supposedly led a shady life before WWII and those skills come in handy in 1941, when the Nazis and their local collaborators start rounding up Jews in Belarussia. The Bielskis lose most of their family, but these four brothers escape into the forest, only to find other Jewish refugees there also. Tuvia and Zus end up defacto leaders of this ragged group, trying to find food and shelter and keep everyone safe from Nazi patrols, but the brothers don't always agree on how that should be done. Eventually they part, Zus joining a Russian partisan group and Tuvia staying with the ever growing refugee camp, but each in their own way, resisting the Nazis and the trying to keep their humanity amidst horrendous times.

I especially liked how the refugees were portrayed as humans, not saints, with understandable flaws and social baggage. They espouse the idea of community, but they have to struggle, just as hard as they do against the Nazis, to attain that lofty goal. And they do not always succeed. But they also have moments of wonderful humanity, sharing and love -- and overall, an amazing will to live, not just survive. And that's what makes Defiance an inspirational movie, rather than a depressing one.

Liev Schreiber, as usual, does a fantastic job playing Zus. If you are a fan of Daniel Craig's sharp dressed, coolly competent James Bond, then you might not like his turn as Tuvia Bielski, a Jewish resistance fighter in WWII. He spends most of the movie in the woods, unkempt, unshaven, and uncertain about his role as leader of the hidden Jewish refugee camp. And yet, I think this is one of his most moving roles yet and definitely worth checking out.

Promote Your Page Too