When Albert and Sylvia Caldwell decided to leave their mission work in Siam and return to the United States, they never dreamed that they were in for the journey of their lives. How could they ever imagine that the ship they would be traveling on, the Titanic would forever be known as one of the greatest disasters ever? Traveling with their 10-month-old son Alden, the Caldwells set out on the voyage that would not only change their lives, but history.

In A Rare Titanic Family: The Caldwells’ Story of Survival, Birmingham author Julie Hedgepeth Williams recounts the perilous journey of the Titanic, but also the events that led up to the Caldwells being on this infamous voyage. The author describes the stories her great-uncle Albert told her and does her own extensive research to piece together a harrowing account of survival, strength, and courage. In one gripping moment, Albert must decide whether or not to place his family on a lifeboat. This might seem like the easiest decision in the world, knowing what we know now about infamous night, but the passengers aboard the Titanic were told that this was a ship that even God himself couldn’t sink. Also, the circumstances of exactly how Albert ended up on a lifeboat, which was strictly reserved for women and children, are quite suspenseful. A Rare Titanic Family is not your ordinary Titanic book. Williams’ research reflects a new light on how the passengers on the Titanic must have felt during this traumatic experience, but also the mania that followed them after. 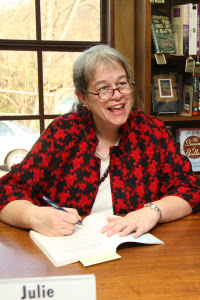 The Oxmoor Page Turners, the Homewood Public Library’s very own book group, will be discussing A Rare Titanic Family for our April read, since April marks the 100th anniversary of the Titanic sinking. Author Julie Hedgepeth Williams, a professor at Samford University, will be joining the Oxmoor Page Turners on April 10th to discuss her great-uncle Albert and his family’s miraculous journey on the Titanic. The meeting will take place in the Round Auditorium at 6:30 PM  on April 10th. For more information about the Oxmoor Page Turners, please call 205-332-6601 or see a staff member at the Homewood Public Library.

Ms. Williams will make a second appearance at the Homewood Library on Thursday, April 19th at 6:30 PM in the Large Auditorium. She will discuss in further detail her book, her family, and other interesting information regarding the Titanic. A Rare Titanic Family will be available for purchase and Ms. Williams will also be signing copies. As a special treat, she will be dressed in period clothing!  For more information about this special appearance, please call 205-332-6600.

Don't forget to place your hold on A Rare Titanic Family: The Caldwells’ Story of Survival. For more information about other appearances and other related events for A Rare Titanic Family, check out the book's Facebook Page.
Posted by J. Wright at Thursday, March 22, 2012

Promote Your Page Too